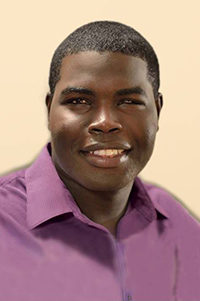 We think we fully comprehend that courage, creativity and determination are critical to our success. However, you will quickly see how much we all still have to learn about the innate power of these concepts when you hear the story of Mario Arnauz Bonds. Bonds is a multitalented motivational speaker and singer-songwriter. Made famous by NBC Universal's 2012 run of The Glee Project, season two, in which he showed the world that a person with a disability can rise to meet any challenge, Bonds enjoys entertaining and inspiring millions.

One of a set of triplets and adopted at age 16, Bonds comes from a large family of nine siblings. Born with Morning Glory Syndrome, a degenerative condition that gradually destroyed the optic nerve in both of his eyes, he was completely blind by the tender age of nine. After losing both his vision, and his parents, Bonds experienced a childhood the likes of which few of us can even imagine—suffering abuse on a number of levels, abandonment and eventually, homelessness. Amazingly, one thing he never suffered from was hopelessness.

Instead of allowing these setbacks to define him, Bonds utilized them to propel himself forward—earning a spot in the prestigious Suitland’s School for the Visual and Performing Arts in his teens, followed by a degree in Journalism from George Mason University. Among his various achievements, he became a gifted technology expert, providing skillful computer guidance to people needing support.

In recognition of his work with students and the performing arts, Bonds was awarded the prestigious Imagination Award for 2012 by the Imagination Stage, a theatre arts organization for young people. He is the author of Without Sight but Full of Vision, a memoir recounting how he overcame a childhood marked by blindness, abuse and abandonment. 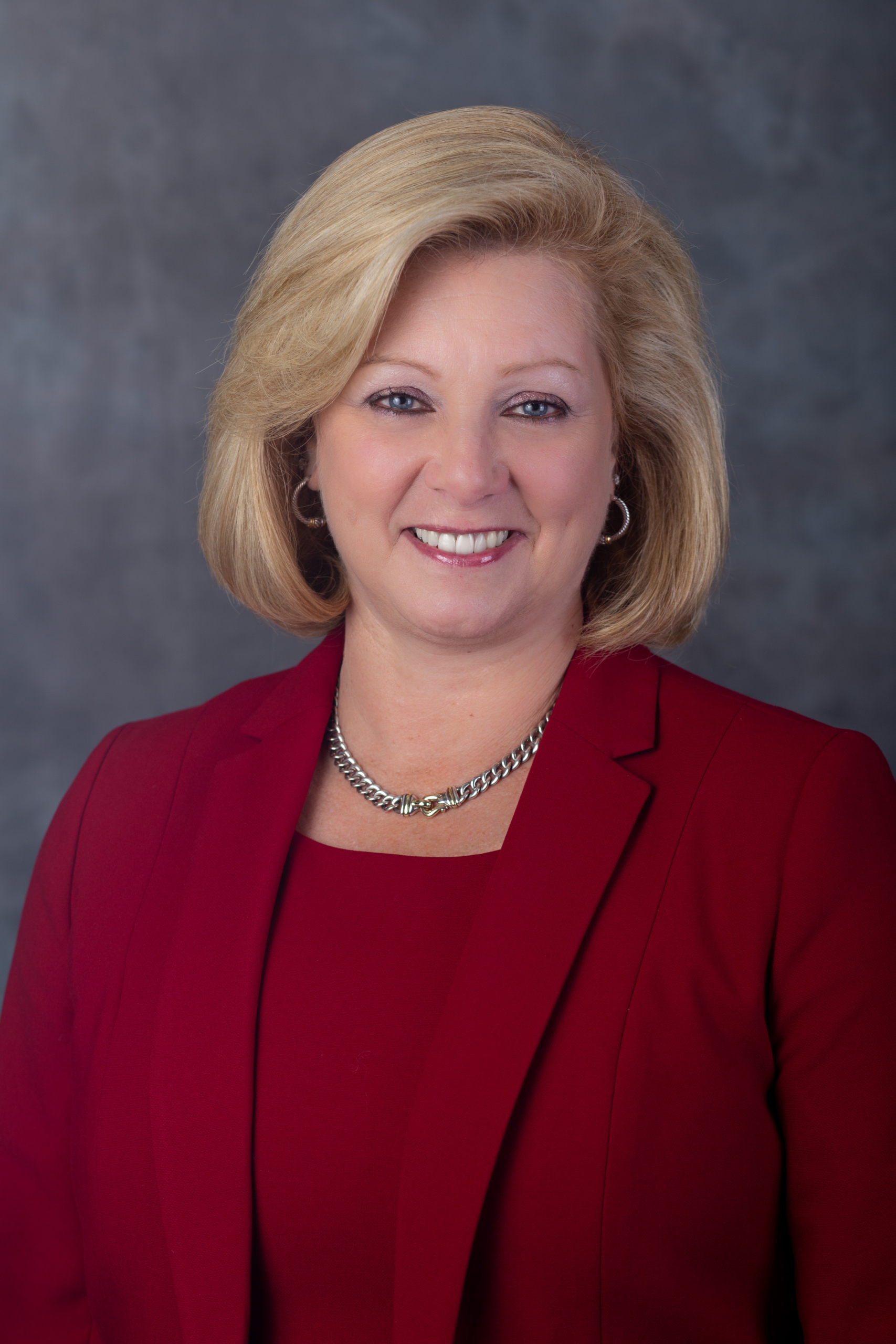 Earlier in her career, Colombo was a founding partner and principal consultant at Healthcare Management Partners, LLC in Milford, a private consulting firm with its core business in physician practice management. 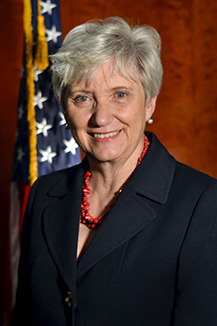 Toni Wolf has served as the Commissioner of the Massachusetts Rehabilitation Commission (MRC) for the past three years. Utilizing her 30+ years of experience and grit as a non-profit professional, she has led the strategic direction, oversight, and resource management to further enhance the agency as well as overall consumer experience.

Wolf leads MRC with the belief, “If the system isn’t enhancing the quality of life for the individual, we at MRC must change the system.” During her time as Commissioner, she has made a number of enhancements to the agency including: streamlining entry to the array of services provided, empowering individuals living with disabilities and their families to have a voice and active partnership with the agency, and working to ensure consumers have the technology they need to stay connected to services and supports during the COVID-19 pandemic. Wolf has also diversified MRC’s funding sources through new partnerships with the Department of Mental Health and the Department of Transitional Services, providing innovative employment approaches for individuals with disabilities.

Originally from New York, Wolf graduated from the University of Arizona with a Bachelor of Science in Special Education. Upon commencement, she spent several years in Australia learning from its indigenous people to honor one’s cultural values and ways.  She returned to the United States with vigor to shift the paradigm of how individuals with disabilities are recognized, not for their limitations, but for their strengths. Prior to joining the MRC, she served as the Executive Director of Employment Options Inc, an organization dedicated to empowering individuals and families in mental health recovery to thrive in their communities. 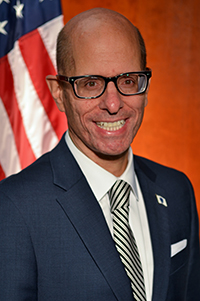 Commissioner, Massachusetts Commission for the Blind

Legally blind from a young age, David D’Arcangelo has built successful careers in both the public and private sectors and now serves the Baker-Polito Administration as the Commissioner of the Massachusetts Commission for the Blind (MCB).

As Commissioner, David oversees the agency’s $34M budget to ensure the highest quality of vocational and social rehabilitation services are delivered to individuals with blindness. MCB is one of fifteen agencies within the Executive Office of Health and Human Services (EOHHS).

Previously, David served Director of the Massachusetts Office on Disability (MOD).  David also served three terms as a Malden City Councilor At Large and was one of very few elected officials in Massachusetts to openly serve as a person with a disability.  David’s extensive experience in government and public policy includes serving the Administrations of four Governors and as an aide in the Massachusetts State Legislature.  David may be the first person to reach a statewide ballot in Massachusetts who self-identified their disability when he became the 2014 Republican Nominee for Secretary of State. 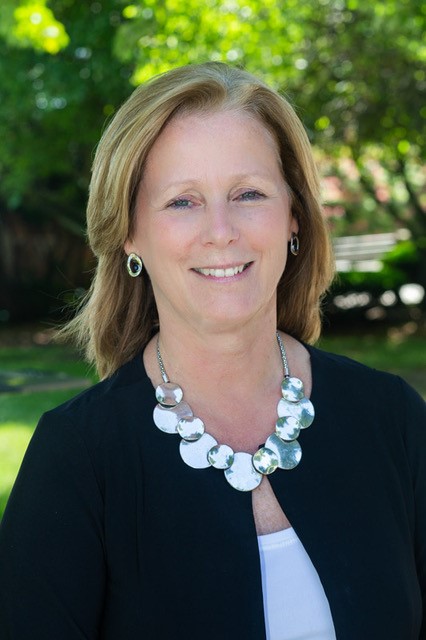 Kathleen A. Petkauskos is the director of Work Without Limits and oversees all its staff, programs, and services including Disability:IN Massachusetts, training and consulting, all events including conferences, career fairs and disability mentoring days, benefits counseling services, and its administrative employment network under Social Security’s Ticket to Work program. Under her direction, Work Without Limits received the UMass Chancellor’s Award for exemplifying the mission of the medical school and the Northeast Human Resources Association’s Diversity Champion Award for consistently demonstrating an unwavering commitment to diversity and inclusion in the workplace. Ms. Petkauskos is an inductee of the Susan M. Daniels National Disability Mentoring Hall of Fame and has extensive VR experience including vocational evaluation, supported employment, benefits planning, and job placement for people with disabilities.

Prior to coming to UMass, Ms. Petkauskos was president of the Massachusetts Project With Industry, Inc., dba Resource Partnership, a private non-profit organization that engaged and educated employers and assisted individuals with a wide range of disabilities to secure employment.

Ms. Petkauskos has an associate degree in Physical Therapy and certificates in Vocational Evaluation from Assumption College and Non-profit Finance and Administration from Suffolk University. 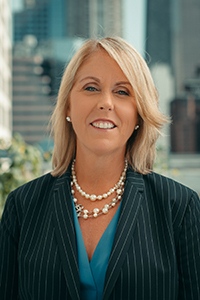 As President and CEO of Disability:IN, Jill Houghton and her team are working to build an inclusive global economy where people with disabilities can participate fully and meaningfully. Disability:IN has empowered over 200 leading brands to advance disability inclusion and equality.

Jill’s passionate approach to the inclusion of people with disabilities comes from her core. Her challenges associated with having a learning disability ignited her career at the federal, state and local levels to drive disability inclusion in business. Jill has grown Disability:IN offerings to nationally recognized programs, including the Disability Equality Index (in partnership with the American Association of People with Disabilities), Supplier Diversity program, NextGen Leaders Initiatives, and Inclusion Works which has resulted in over 62,000 people with disabilities being hired.

Jill has more than 25 years of diverse leadership experience at the federal, state and local levels working with business on disability inclusion. Prior to Disability:IN, Jill served as the Executive Director of the Ticket to Work and Work Incentives Advisory Panel until its legislative sunset in January 2008. The bi-partisan panel was housed independently within the Social Security Administration and provided advice to the President, Congress and the Commissioner of Social Security on issues related to the Social Security, Medicaid and Medicare work incentives programs for individuals with disabilities.

Ms. Houghton has testified before the U.S. Senate and the U.S. House of Representatives on issues related to business commitment to recruit, hire and retain employees with disabilities. She currently serves on the board of the US International Council on Disabilities and the New York City Comptrollers Advisory Board Council on Economic Growth through Diversity and Inclusion. Additionally, she serves on the Boston University, Rehabilitation Research and Training Center (RRTC) on “Improving Employment Outcomes for Individuals with Psychiatric Disabilities” Knowledge Translation and Utilization Advisory Council. 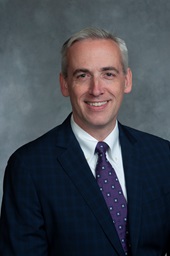 He is also a member of the Ways & Means and Telecommunications Utilities & Energy committees. Rep. Cutler is an attorney, author and former newspaper editor. He is a graduate of Skidmore College, Suffolk University Law School (J.D.) and the University of Massachusetts-Dartmouth (M.P.P., Environmental Policy). 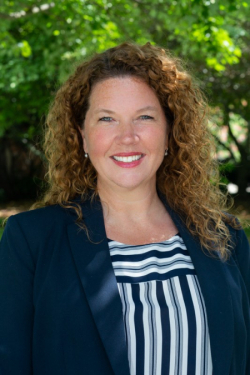 Ms. Rivers has consistently fostered diversity, inclusion, and social justice throughout her career. Her experience managing learning and development teams, marketing operations, as well as regional corporate responsibility and global diversity and inclusion functions, has significantly influenced the collaborative and inclusive nature of both her leadership style and approach. With Marketing Operations leadership experience, Ms. Rivers always considers the client first when gathering needs, developing concepts, and executing projects, programs, and outcomes.

Learn about our Breakout Session Presenters