My name is Megan Northup and I have a mental illness. I have been in the hospital many times over the past five years, which has led me to miss weeks of work at a time.  I used to feel shame upon returning to work because no one except my boss and a few close co-workers knew where I had been or why. Initially, I felt like my mental illness was a secret that I had to keep because nobody at work talked about it. If I mentioned it, I always felt like I had directly addressed the elephant in the room, and no one knew how to respond. However, as time went on, I realized that it was not those I worked with who were uncomfortable with my mental illness, it was me. I saw it as a mark against my character and I thought it defined who I was as a person. Despite the internal or external stigma I felt at work upon returning from a hospitalization, I overcame it. I came to work every day and just did the best I could. This was not always easy. I struggled to concentrate on tasks because some of my medications made me extremely tired. I found that things I could usually handle just fine when I was feeling well could cause me to breakdown to the point that I wanted to quit. However, I knew quitting was not the answer as I got far more from work than just a paycheck on Friday. Work gave me a normalcy that I felt was missing from my life. To do my work and do it well gave me my confidence back and helped my self-esteem, which was almost nonexistent. Being productive again made me feel great and part of something bigger. That connection to my work helped in my recovery from my mental illness.

My Own History with the Stigma of Mental Illness

If I think back to my days at American International College as a young occupational therapy student who had yet to experience my first psychiatric crisis, I realize that even then I struggled with depression, anxiety and suicidal ideation almost daily.  I realize that I also struggled back then with the stigma of mental illness. I struggled so much so that I refused to do fieldwork in a psychiatric setting due to the fact I identified with what the clients were going through. I did not want to be associated in anyway with mental illness.  Life, however, sometimes has a funny way of coming full circle and years later I would find myself in the hospital, on a locked psychiatric unit, and those people I once stigmatized were my peers.

What I learned from being on a Psychiatric Unit

The biggest shock I received from being on a psychiatric unit was that the people around me were just normal everyday people. Yes, I may have met them at a low point in their life. Yes, they were all struggling with whatever issues they had but despite this, they were some of the nicest, most kind, and empathic people I had ever met. They were each trying their hardest to get back to their lives, spouses, children, hobbies, and jobs. I know that many of the people I have met are on disability income and do not work due to the difficulties they face on a daily basis. However, I firmly believe that given the chance and the right supports, many of them would be able to work and benefit from working as I have.  People with mental illnesses have a lot to offer employers: they are resilient, resourceful, and creative. They have overcome adversity, are well-spoken and well-read, and all have something to offer society. I have met individuals who are teachers, veterans, waiters, engineers, and students – all who are a part of an untapped talent pool frequently overlooked due to stigma and misconceptions. All they need is a chance.

Sometimes I think our fear of things that are different or unknown can make us wary of interacting with, getting to know, or working with people who we view as different from ourselves. In the media, on television, and in the movies we see individuals with mental illnesses portrayed in a negative light, but these depictions of a few people with mental illnesses should not define a whole group of people who are as diverse in personality, skills, and life experiences as you and I. Therefore, I ask you to look beyond the stigma and misconceptions, and give people with mental illnesses a chance to prove themselves and to be productive, contributing members of our society. 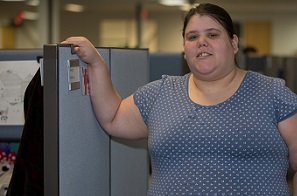 Megan is a project coordinator at Work Without Limits (WWL) where she provides support to both service and research staff including the WWL job board – Jobs Without Limits. Megan also assists in the planning and coordination of WWL events and presentations including the annual ‘Raise the Bar HIRE!’ conference. She has presented at educational events and conferences offering her perspective of being an employee with a disability. Her experience of living and working with a disability brings a unique perspective to the many projects on which she works. Megan has her Bachelors of Science in Occupational Science from American International College.